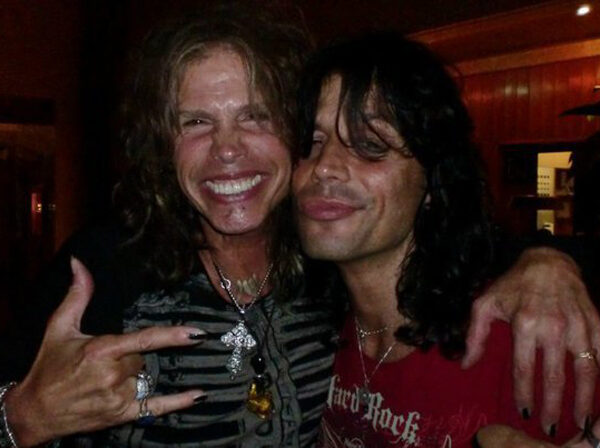 This time nothing intervened on the route of the Aerosmith flight in the suggestive territory of the city of Venice.

The Bad Boys of Boston are back once again with heart and determination to show their splendid form after about 11 years of absence from Italy.

Thousands of us witnessed an overwhelming show but this time there were exceptional spectators in the front rows.

Steven Tyler’s cousins ​​together with the Mayor and the councilor for tourism of Cotronei, the native town of Giovanni Tallarico (Steven Tyler’s grandfather), came directly from Calabria to fulfill a dream …

It is on this occasion that several appointments overlap … After about two years of preparations, the mayor of Cotronei Mario Scavelli, the councilor for tourism Giuseppe Pipicelli (curator of the project), some cousins ​​of Steven Tyler including Antonio Grassi (legal consultant of the project), in collaboration with Luca Celletti (Singer founder of the Eurosmith band, the first Italian tribute to Aerosmith) will have to meet Steven Tyler to personally confer on him the honorary citizenship of Cotronei.

In the afternoon before the concert, I manage to find out where the Band had stayed, soon Tony Grassi managed to get in touch with Steven. It is an opportunity for the Tallarico family to introduce themselves and show him the family photos portraying Steven as a child together with his mother and his uncles and the letters that have crossed the ocean to America, keeping part of the family in contact for years. family emigrated at the end of the 19th century with those who remained in Calabria.

Giovanni Tallarico, Steven’s grandfather was the first to emigrate to the USA joined, immediately afterwards, by three of his brothers, all of them were musicians. Shortly thereafter, the Tallarico Band was born.

Personally I got to meet Steven Tyler on several occasions but this time I got to know him even more. Our meeting took place after the concert in the hotel lobby where Aerosmith were staying, after waiting together with my partner and dear friend, well-known Rock Stars photographer, Alex Ruffini. It was great to see Steven return with his delightful partner Erin Brady from an intimate night gondola ride right after the show. It was really romantic to see him improvised as a gondolier for his woman …

Having met him again after so many years and spending some time together gave me the opportunity to rediscover a person with remarkable strength of mind and depth of feeling. It was like meeting an old friend again thanks to his availability and his interest in my private life and the progress of the Eurosmith. A sign of appreciation on his part that I very much welcome. His humanity, simplicity and irony really fascinated me.

After conversing on profound life topics and at the same time sharing light moments with funny anecdotes, we naturally talked about the recent meeting with his family of origin and the imminent conferral of his honorary citizenship.

The appointment for the meeting with his cousins, the mayor and the councilor takes place the following day.

It is good for the soul to see that even a global Rockstar of Steven’s caliber is moved in such a way and has such a strong sense of family and the bond to his origins. Truly an exciting moment, a pleasure and an honor for me to participate in such an important event in his life.